Chapter 7 – The Monkey without a Tail 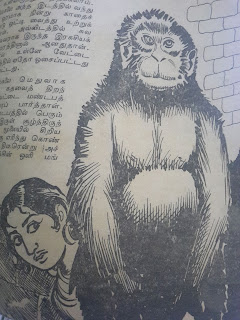 Manimeghalai stood still in front of the mirror, wondering whether she had indeed seen the face or not.

Did she really see it or was it a dream? If it was a dream, shouldn’t she be sleeping?

She touched her face to confirm that she was indeed standing in the Pazhuvur Queen’s chambers in front of her mirror. She turned around and saw that she couldn’t have imagined the face in the dark as the lamp near the mirror was lit rather brightly. She stared hard at the opposite wall. She knew that there was a secret entrance there and she also knew how to open from outside. Through the secret entrance, one could enter the hunter's chamber where they had preserved wild animals that were hunted by the menfolk of their clan. She thought she also heard some sound from the secret inner chamber.

Manimeghalai went near the wall and opened the secret entrance. There was a small lamp burning low in the hunter’s chamber and suddenly it appeared as though someone had moved in front of the light. When she saw again she could see the lamp and nothing else.

Manimeghalai shook her head and blinked her eyes again.

Did she just hallucinate again? Was she still dreaming?

Manimeghalai clapped her hand and asked, ‘Who is there?’ In response, she heard the flapping sound of a bat that moved from one end of the chamber to hang upside down near the never-blinking owl that was perched on the roof. Manimghalai also heard a coughing sound that sounded very suspicious.

Determined to get to the bottom of this mystery, Manimeghalai stood at the entrance and called out for her companion.

“You called me Princess?”

After a while, her handmaiden came there holding a lamp in hand. After stepping inside the hunter’s chamber, she said, “But Princess there is a lamp lit here already. Why do you need another lamp?”

“I wish to inspect this place. I thought I heard a sound.”

“It must be the bat flapping its wings. What else could it be?”

“No. Just now I was looking at the mirror and I thought I saw somebody else’s face in it.”

“A face? How did it look? Was it as handsome as Arjuna or Manmadhan?” asked her companion and laughed.

t“Chandramathi! Are you mocking me?”

“No Princess! You told me that a man plagues your dreams… Did you perchance see his face?”

“There comes a time when all girls daydream but thankfully it may just last for two days for you. Once the Crown Prince from Kanchi comes here you will forget that other face. I am sure of it.”

“Be that as it may. Right now let’s go into the Hunter’s Chamber and check.”

“We will be wasting our time Princess! The place must be full of cobwebs and dust. We will merely ruin our saris.”

“We might be plagued by a cough and sneeze. And tomorrow when everybody comes…”

“I don’t care if I cough and sneeze. I wish to check the chamber now. Come with me.”

Both women stepped into Hunter’s chamber. Chandramathi kept the lamp in her hand slightly elevated while Manimeghalai moved around the cavernous room. Manimeghalai also noted that there were many footprints on the dusty floor as though as someone had roamed around there.

“Look at that!’ Said Chandramathi

“Looks like the monkey is very happy to see you.”

“Princess… now you are mocking me?”

“You have mocked me for so many days. Can’t I do the same?”

“Maybe you saw this monkey’s face in the mirror. It stands opposite to the wall through which we came. See there… the monkey is moving again!”

“No! It the shadow, that’s moving. When you move the light in your hand the shadow moves and it seems like the monkey is moving. Come let’s leave. I see no one here.”

“Then I might be right. You must have seen the monkey’s face in the mirror or it could even be this owl’s face. Look how it is staring at us.”

“Us? Why would you include me? I think it is staring only at you, entranced by your beauty!”

“Then whose face do you think it was, that stared at you in the mirror?”

“You and others have decided that I might be suffering from delusions and if I tell you god knows what you will think. It was the face that I keep seeing in my dreams. But I know not how it came into the mirror. After seeing such a handsome face, it pains my heart to see the lifeless ever-staring faces of these animals. Come let’s leave now. I will go back to the mirror and see if I can see that face again.”

Both the women left the chamber through the secret entrance. After they left, Vandiya Devan came out of hiding from behind the monkey that had no tail. He sneezed, again and again, thanks to the dust and cobwebs that was there behind the monkey.

After that, he expressed his thanks to the monkey that had hidden them so well.

“Monkey! I got angry when that handmaiden compared my face to yours. I had to stop myself from revealing my handsome form. Thankfully you stood there as tall as a man shielding me from them or else I would have been caught by those women and god knows what they would have done to me.”

Even as he spoke those words, he knew in his heart that it wouldn’t be so bad if the women had spotted him there. He already knew their identities.

He had heard the conversation between both the women and was able to guess who they were. That too, Manimeghalai’s voice was pretty loud and clear to him.

Didn’t she say that the face she saw in the mirror was the one that she has seen in her dreams? What could that mean?

Many old memories came back to his mind.  He knew that Kandanmaran had spoken about him to his sister many times. He remembered the last time he was in the palace and a few glimpses that he had of that shy girl who was hiding behind her mother. Kandanmaran then had told him that they had got a better alliance for his sister and that she had accepted the said groom.

Did he lie to me then? Maybe this girl hasn’t changed her mind after all.

He realised that these were fanciful thoughts and that he needed to escape from this hunter’s chamber soon. He can’t use the elephant’s trunk to leave the chamber as it led to the women’s anthapuram. He needed to find a way back to the Ayyanar temple. He tried to look for clues on the wall but could find nothing. As he came round he neared the crocodile that was lying near. He tried to check the wall for more clues to open the way out of the chamber but knew that he was wasting time.

God! Do I have no choice but to enter the women’s anthapuram and escape? Maybe Manimeghalai might take pity on him and help him escape! What answer could he possibly give if she asks why he came there? Could he perhaps tell her that he loved her dearly and came there to meet her secretly?

Even as he thought that he rejected it. It was a terrible lie. Even ‘he’ couldn’t say it to save his life. He was sure that even if he dared to utter such a lie, there is very little chance of Manimeghalai believing it.

If he escaped through the anthapuram Manimeghalai might not be alone on the other side. There might be other women too. And if Sambuverayer knew about this, he wouldn’t hesitate to kill him!

As he thought thus, he looked at the lifeless crocodile on the floor again. “Stupid Crocodile! Why do you gape thus with your mouth wide open?” he said and aimed a good kick in its direction. The crocodile moved and as it moved a trap door opened on the nearby wall.

“So it’s you that has been hiding this secret. Why didn’t you tell me this before?” he said and moved the crocodile further. As the crocodile moved, the trap door opened wide and steps were seen. They were the steps that he had taken to lead him into the chamber. 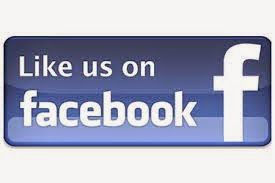 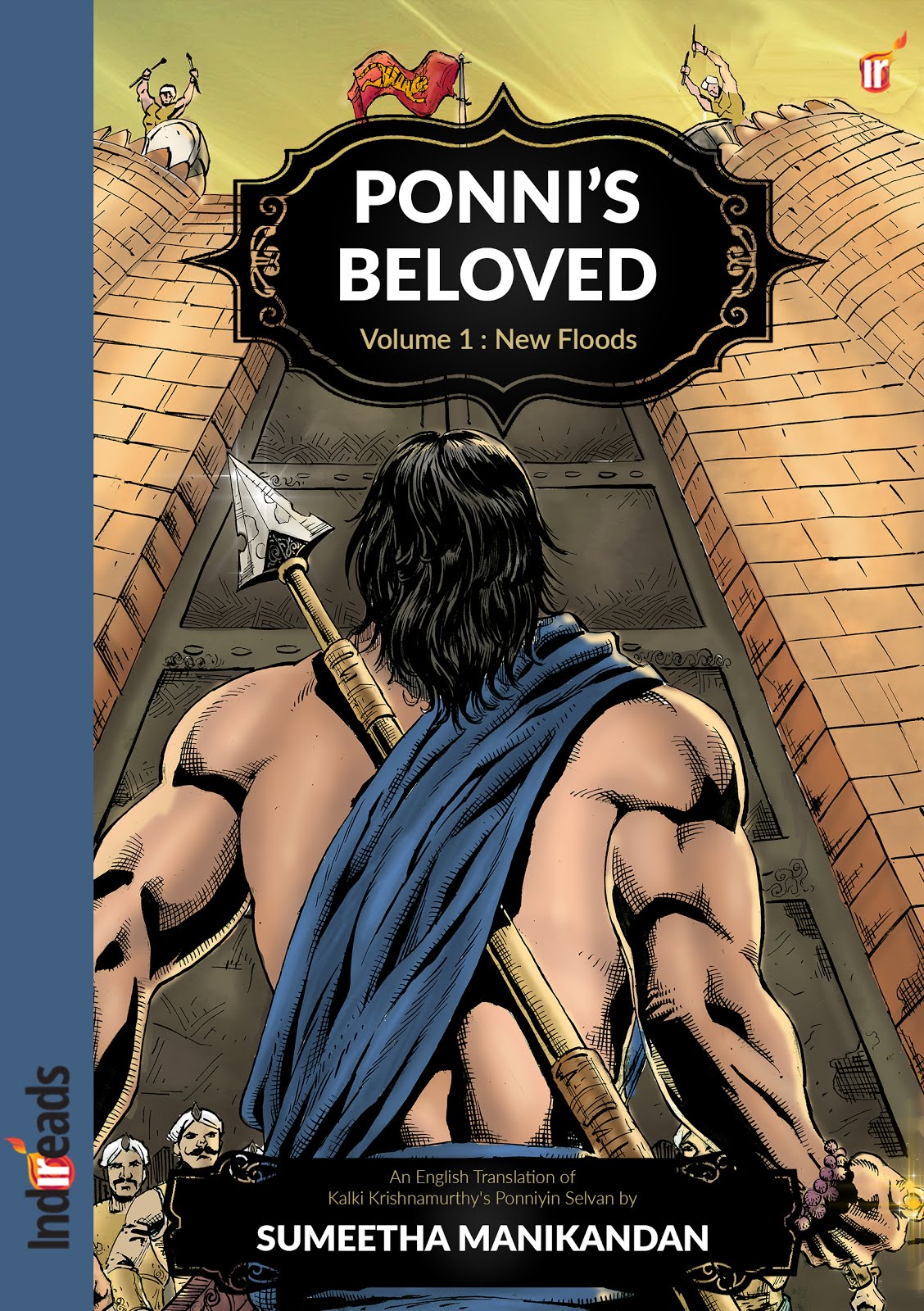 Ponni’s Beloved – The Story so far…

In the 10 th Century AD the glorious Cholas ruled over the land of Tamil Nadu with Emperor Sundara Chola on the throne. Sundara Chola... 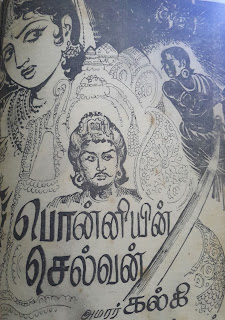